Special Report and Teaser Visual of "Sakananoko" starring Non have been released! In addition, the theatrical release date has been set!

The movie "Sakananoko" starring Non has released its special trailer!

The 30-second special feature film, which is the first "Sakananoko" film to be released, features Mee-bo (played by Non) saying, "Well then, let's go! played by NON's Mee-bo, starts off with a cheerful "Sakana-kun in full throttle!
As the playful melody of the Pascals, who is in charge of the music, played in the background, Mee-bo, who dreamed of becoming a fish doctor someday, said, "I want to be a fish doctor someday! " Meebo, who has been drawing pictures of fish since he was a child, is shown as he continues to love what he does.
He has been drawing pictures of fish since he was a child and has always loved it. Mee-bo, who is a little different from the other girls around her, is shown in the picture. His mother Michiko, played by Haruka Igawa, affirms that "it's okay for him to be the way he is." The delinquents played by Yuya Yagira, Yuto Isomura, and Amane Okayama praise Mee-bo's unwavering "love for fish" and say, "You haven't changed, have you?" The warm and heartwarming special report is now completed, filled with Mee-bo's straightforward feelings and the adorable charms of the characters surrounding him!

In the teaser visual released at the same time as the special trailer, Non, who plays Mee-bo, appears with a "boxfish" on her head, the symbol of Sakana-kun!

This is the first public appearance of Non wearing the "HAKOFUGU hat"! 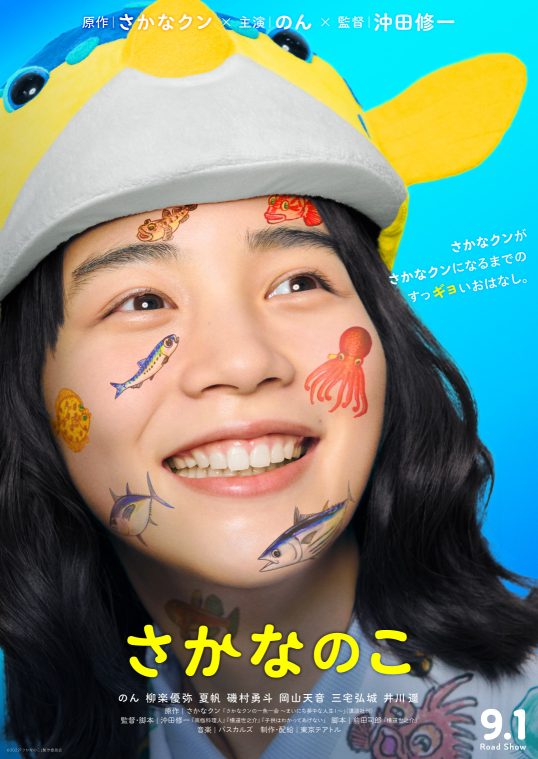 With the catchphrase, "It's a funny story about how Sakana-kun became Sakana-kun." With colorful sea creatures painted all over his face and a smile like the sun, he's ready to show us more!

What's more! In addition to the teaser visual, the design of the "original postcard," which is a purchase bonus for the Mubicicket card, has also been released!
Unlike the energetic teaser visual, the postcard features a profile of Mee-bo wearing a soft air.
Movie-ticket cards are now on sale at some theaters and on the Meijer website. 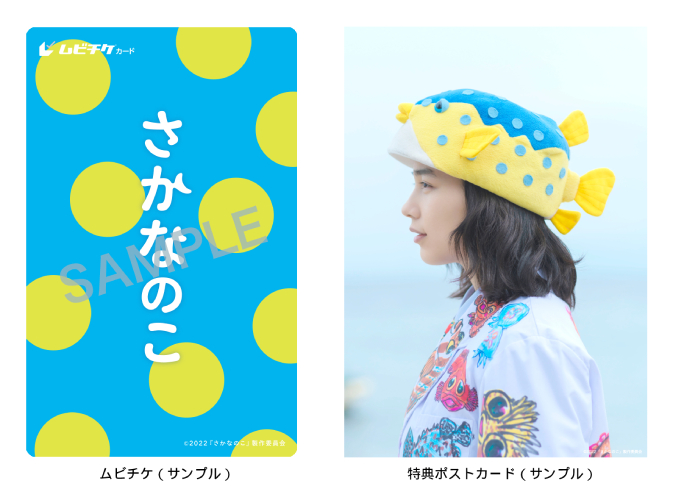 ・Purchase at theaters
Please check [the "Sakananoko" theater information page] below to confirm which theaters are handling Movie-ticket and purchase it at the theater.
https://eigakan.org/theaterpage/schedule.php?t=sakananoko

And! The release date of "Sakananoko" in theaters is also set!
It will be released on September 1, 2022 (Thursday), on a nationwide roadshow!

This is a touching film that will make you laugh and cry, and make you want to run towards your "favorite" with Mee-Bo.
Please look forward to more information in the future!

A child who has always followed his favorite fish has become a "Sakana-kun".
"Mee-bo", an elementary school student who loves fish, is always thinking about fish, whether he sleeps or wakes up. He stares at fish every day, draws fish every day, and eats fish every day. In contrast to his father, who worried that he was a little different from other children, his mother warmly watched over him, and rather than worrying about him, she kept pushing him along. As a high school student, Mee-bo is still obsessed with fish, and somehow he gets along well with the delinquents in town, and before he knows it, he is in the center of the action, as if he were the hero of something. Eventually, Mee-bo begins to live on his own, and amidst unexpected encounters and reunions, he is loved by many people and dives straight into the only path that only Mee-bo can take...

■Links to past articles about "Sakananoko"!
・April 14
Additional cast members of "Sakananoko" starring Non have been announced!
https://nondesu.jp/15155/

・・March 8
A film adaptation starring NON!
Sakana-kun's autobiography "Sakana-kun's One Fish at a Time! 〜"will be made into a movie, "Sakana no Ko", to be released on the road in the summer of 2022!
https://nondesu.jp/14729/