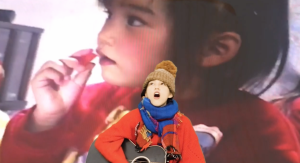 Non's music label "KAIWA (RE) CORD" surprised and released the digital single "Christmas Song". The music video was released on Saturday, December 14 at midnight of Christmas.
The production and editing of the video is by Non. The video shows Non as a child.

"I'm going to do a live show in December, so I decided to make a Christmas song. I took out the acoustic guitar and made it. I had a feeling that it was going to be an important song, so it was difficult to say it was a Christmas present, but I wanted to deliver it to everyone.
This is my first time working on a music video. I'm shy and excited, but I want everyone to see it.
It was really embarrassing to see the video of me as a child."