We will continue to release more information as it becomes available, so please look forward to more updates! 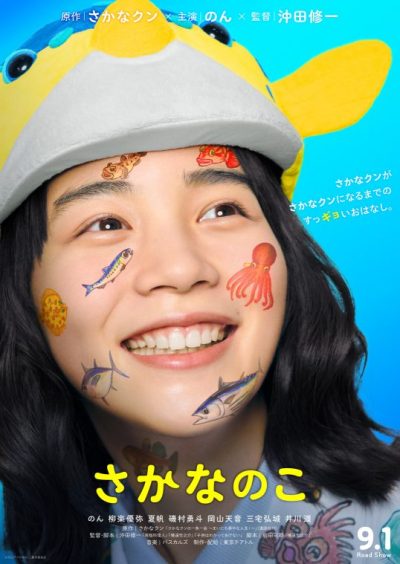 The movie "Sakananoko" starring Non will be released in theaters on September 1, 2022.
Sakana-kun's first autobiography "Sakana-kun no ichigo-ichi-e- A life of daily obsession! 〜(published by Kodansha Ltd.), and the latest film directed by Shuichi Okita. The teaser visual has finally been transformed into a poster and flyer, which are now being displayed in theaters.
Non, who plays the role of Mee-bo, is wearing a "boxfish", the symbol of Sakana-kun, and appears in a big way!
*Please note that the posters will be posted sequentially depending on the theater's situation.

We will continue to release more information as it becomes available, so please look forward to more updates!

What is "normal"?
A child who has always followed his favorite fish has become a "Sakana-kun".
"Mee-bo", an elementary school student who loves fish, is always thinking about fish, whether he sleeps or wakes up. He stares at fish every day, draws fish every day, and eats fish every day. In contrast to his father, who worried that he was a little different from other children, his mother warmly watched over him, and rather than worrying about him, she kept pushing him along. As a high school student, Mee-boo is still obsessed with fish, and somehow he gets along well with the delinquents in town, and before he knows it, he is in the center of the action, as if he were the hero of something. Eventually, Mee-bo begins to live on his own, and amidst unexpected encounters and reunions, he is loved by many people, and dives straight into the only path that only Mee-bo can take... Film Information
Movie: "Sakana no Ko"
Cast: Non, Yuya Yagira, Kaho Isomura, Yuto Isomura, Amane Okayama, Hiroki Miyake, Haruka Igawa
Based on the story by Sakana-kun "Sakana-kun no Ichigo-ichi-e - A life of daily obsession! 〜‾" (Kodansha Publishing Co., Ltd.)
Director/Screenplay: Shuichi Okita
Screenplay: Shiro Maeda
Music: Pascals
Production: "Sakananoko" Production Committee
Production/Distribution: Tokyo Theatres
(c) 2022 "Sakananoko" Production Committee
Roadshow from September 1 (Thu.) at TOHO Cinemas Hibiya and other theaters nationwide.

■Links to past articles about "Sakananoko"!
・May 10
Special Report and Teaser Visual of "Sakananoko" starring Non have been released! In addition, the theatrical release date has been decided!https://nondesu.jp/15483/

the film adaptation starring Non!
Sakana-kun's autobiography "Sakana-kun's One Fish at a Time! 〜will be made into a movie, "Sakananoko," to be released on the road in the summer of 2022!
https://nondesu.jp/14729/