The trailer and poster of the movie "Sakananoko" starring Non overflow with "love"! In addition, the theme song will be "Yume no hanashi", a new song written by CHAI!

The trailer for the movie "Sakananoko" starring Non has been released!

The elementary school student Mee-boo shows his "love of fish" by drawing pictures of fish in class, catching a large octopus with his bare hands when he goes swimming, and eating fish dishes for dinner. He is a little different from the other children around him. He has a big dream of becoming a fish doctor someday, and tries working at an aquarium and a sushi restaurant, but things don't go well. Why can't I just love fish? His mother Michiko encourages him, saying, "He likes fish, he draws pictures of fish, and that's all that matters.

With the warmth of his mother and friends, who affirm that "it will be all right just the way it is," Mee-boo continues to pursue his love. This is an extraordinarily kind and extraordinarily positive trailer for all of us who know how difficult it is to stay in love with what you love, and at the same time know the preciousness and brilliance of becoming absorbed in something even when you are lost and on your feet! 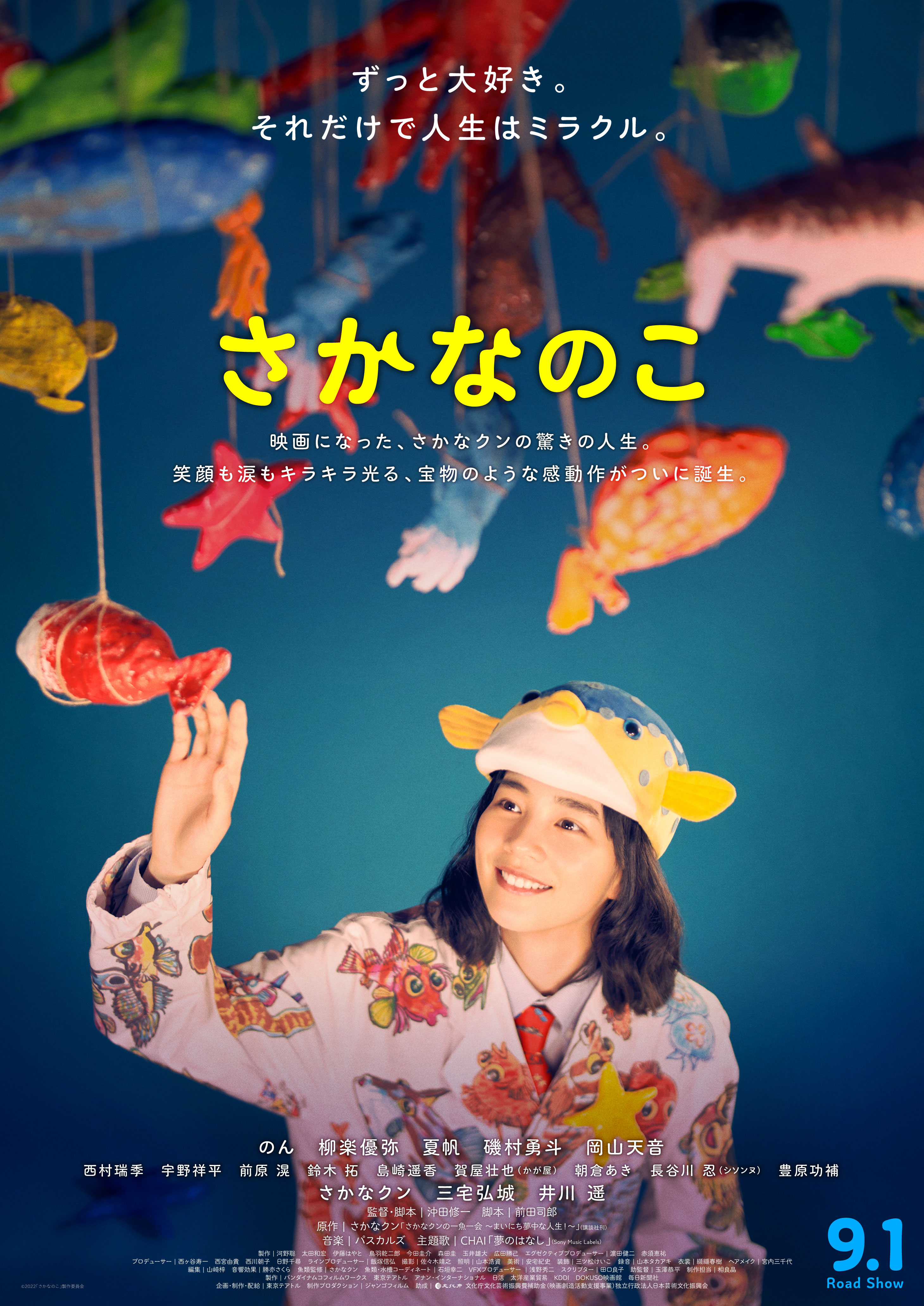 In addition, the theme song for this film is "Yume no hanashi" written for this film by CHAI, a "neo cute" four-piece band!
The song is humorous, full of love and affection for Mee-Boo's life, and is pop, sparkling, and gentle!Based on the autobiography of Sakana-kun, which describes how he became Sakana-kun, the movie "Sakananoko" is a story about Mee-bo, a boy who loves fish, and the warm-hearted people around him who watch over him, and will make you laugh, cry, and smile!

[What is "normal"?]
A child who has always followed his favorite fish has become a "Sakana-kun".
"Mee-bo", an elementary school student who loves fish, is always thinking about fish, whether he sleeps or wakes up. He stares at fish every day, draws fish every day, and eats fish every day. In contrast to his father, who worried that he was a little different from other children, his mother warmly watched over him, and rather than worrying about him, she kept pushing him along. As a high school student, Mee-boo is still obsessed with fish, and somehow he gets along well with the delinquents in town, and before he knows it, he is in the center of the action, as if he were the hero of something. Eventually, Mee-bo begins to live on his own, and amidst unexpected encounters and reunions, he is loved by many people, and dives straight into the only path that only Mee-bo can take...

・ May 19
The teaser poster of the movie "Sakananoko" starring Non has started to appear! Flyers are now being distributed!
https://nondesu.jp/15569/

・May 10
Special Report and Teaser Visual of "Sakananoko" starring Non have been released! In addition, the theatrical release date has been decided!
https://nondesu.jp/15483/

the film adaptation starring Non!
Sakana-kun's autobiography "Sakana-kun's One Fish at a Time! 〜will be made into a movie, "Sakananoko," to be released on the road in the summer of 2022!