[10/28] The movie "Three Sisters of Amama-so" will open in theaters nationwide from today!

The movie "Three Sisters of Amamasou," in which Non plays the leading role, will open in theaters nationwide today.
There will be a stage greeting at "Umeda Burg 7" today, and at "Shinjuku Baltic9" on the 29th. To commemorate the release of the film, 5 minutes of the beginning of the film has been released.
〈Story〉
Mitsunose is a town located between the heavens and earth. On top of a mountain overlooking the beautiful sea, there is a long-established ryokan, Tenma-so. The inn is run by a young proprietress, Nozomi Tenma (Yuko Oshima). Nozomi's younger sister Kanae (Mugi Kadowaki) is a dolphin trainer. Their mother, Keiko (Shinobu Terajima), the grand landlady, still holds a grudge against her father who ran away. One day, a young girl named Tamae Ogawa (Non) arrives at Tenma-so accompanied by a mysterious woman named Izuko (Kou Shibasaki). Tamae is the half-sister of Nozomi and Kanae, and she is alone in this world. She was in a near-death state after a traffic accident. Izuko says to Tamae, "I'm tired of being at Tenma-so. She told Tamae, "You can heal your soul at Tenma-so and then decide whether you want to return to your physical body or leave for the heavenly world. Tamae, however, asked to work at Amman-so instead of staying there as a guest. What is Mitsunose anyway? What is the true role of Tenma-so? The "time of decision" was approaching for Tamae.

■Film "The Three Sisters of Tanma-so

The movie "Three Sisters of Tenma-so" will be released on October 28 (Fri.).

This film is based on the manga "The Three Sisters of Tenma-so," which was created in an attempt to heal the difficult situation after the Great East Japan Earthquake with the power of creativity.
As the synopsis suggests, this is a story about the three sisters who, by looking at the present world between the heavenly world and the earthly world, come to various thoughts and realizations.

◆Attention and Request to Prospective Viewers◆

This film contains scenes of tsunami and flooding, as well as depictions that may remind viewers of a major earthquake. Please be aware of the content before viewing the film. 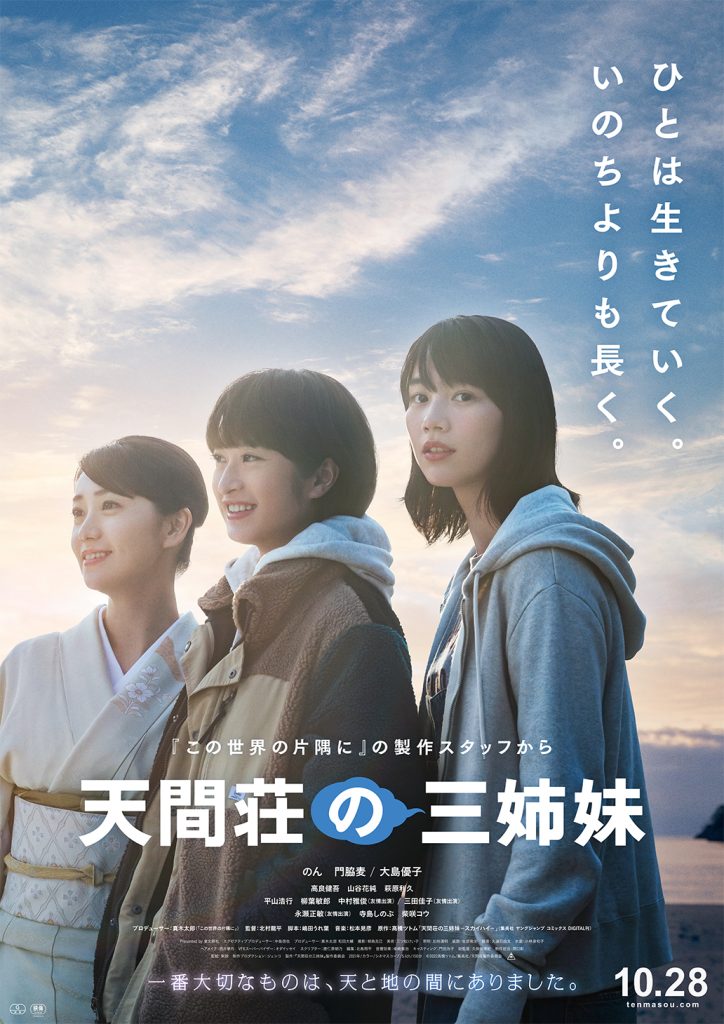